#2 Behind the Screens: Shining a light on background screening in Japan through transparency, education and data

In this interview, HireRight Japan leaders Akiko Wakaizumi, Senior Operations and Business Development Manager and long-time colleague Tris Fenwick, co-founder of J-Screen, sit down to talk about the history, development, and the intricacies of background screening in the country.

Akiko and Tris are both screening industry veterans and have always sought to establish best practices and drive the development and adoption of background screening in Japan. They were working separately towards this shared goal until four years ago when Akiko joined J-Screen, a company established by Tris in 2009, which was acquired by HireRight in 2019. Both pioneers in their own right, they have dedicated more than a decade to developing best practice background screening in Japan.

Part 1: The story behind the screens

Akiko: Hi Tris, what was it that made you choose a career in background screening?

Tris: When I was 21 years old, I travelled to Asia and joined the Royal Hong Kong Police. I spent seven years there as a detective inspector, mainly investigating large scale fraud. After that, I moved on to work for a US investigation company, managing their Malaysia office.

In 1999, I decided to move to Japan. I’d always liked the outdoor scene in the country, and also saw a lot of potential in the background screening market there. This motivated me to set up a consulting firm that focused solely on background screening – the first of its kind in Asia. This firm was later sold to an established market player, and I worked under them for about three years before setting up J-Screen. Fast forward to 2019, my business was acquired by HireRight.

Akiko: That’s quite a journey! What did you hope to achieve when you set up your own business?

Tris at a marathon in Japan

Part 2: More than smoke and mirrors: Shining a light on background screening

Akiko: That is definitely a mission statement I believe in as well. Did you face many challenges when you first started background screening in Japan?

Tris: One of the greatest challenges was changing the mindset of how companies perceived background screening. I remember arriving to a client meeting where they loudly announced, “Ah the PI is here!” It was very telling of the nature of background screening in Japan back then.

My team and I began promoting pre-employment services, but quickly realised that we also needed to educate our clients that background screening could be done ethically.

Previously, HR departments would hire investigation companies to conduct background checks without obtaining the consent of the candidates. Questionable searches like the “neighbourhood check” were carried out. This involved asking the candidates’ neighbours questions about their private lives, such as – what time they usually came back home, whether they had excessive drinking habits, or what activities they engaged in during the weekend. These searches were all very invasive as the searches/questions often went far beyond what would be deemed appropriate in assessing suitability for a role.

In comparison, transparent screening methods were new and generally viewed as an unusual process that only foreign companies would employ.

To change such perceptions, education was vital. We had to inform our clients of the benefits of screening with the right procedures that adhered to the local regulations. We also focused on the repercussions, explaining the potential damage to a company’s reputation if they dealt with illegally obtained information, and the possibility of losing potential employees if they continued to practice the traditional invasive and non-consensual background screening processes.

Akiko: How has background screening evolved in Japan throughout your career?

Tris: The industry has since moved away from a smoke and mirrors PI-focused service, to one that is more transparent and compliance-led.

Signing my first major client, a well-respected investment brokerage firm, was a great moment that signified a turning point – we were on track to grow background screening in Japan. In the past, there were no other real competitors offering consent-driven pre-employment screening in the country – it was either a local PI, or a very expensive overseas investigation company. We were one of the few companies to provide an in-country ethical and transparent background check service. We were one of the pioneers, and through constantly educating our clients, we made a breakthrough.

With the implementation of Japan’s Personal Information Protection Act in 2005, many companies became more aware of what could and could not be legally conducted in Japan. Initially, many companies suffered a knee-jerk reaction to the law and were under the misapprehension that the law forbade them from releasing any information to third parties. Eventually with time, companies became aware that they could release information, if they could confirm that the individual has provided permission and ensured compliance.

However, the problem is that the law does not dictate what constitutes evidence of permission. Therefore, companies and universities have taken it upon themselves to interpret this differently, implementing vastly different requirements based on their own understanding of the law.

Akiko: What are the main differences between background screening in Japan and the rest of APAC?

Tris: In Japan, there is limited availability of public record information, such as police criminal record checks, court-based checks, and credit checks. This has made the verification process much more challenging.

To mitigate the unavailability of criminal checks, we have been collecting our own court data since 2004. Now, we have one of the largest repositories of civil litigation records, criminal court case records and organised crime data in Japan.

As for educational checks, these are much more complicated due to the differing policies employed by the various universities. For example, some universities have their own specific forms to be completed, some may require the original document sent by post, and some may require a call from the candidate. As such, with no standard procedure across all universities in Japan, education verification is more challenging, expensive, and takes longer to complete. This is opposite to the US where these records are easily accessible online, or some APAC countries where you simply fax over a confirmation letter. For this reason, we usually handhold the candidate to guide them through this complicated process, provide them with the necessary documentation, and constantly follow up with them.

Akiko: Finally, what are you most proud of when you look at the business today?

Tris: I am proud of our people, our integrity, and our data – especially our proprietary database of known members of organised crime that the team has been collecting daily for over 15 years. Since the very beginning, all the staff have been dedicated to the business and contributed to moving the company and driving the industry to greater heights with hard work. J-Screen’s acquisition by HireRight was a great step forward for the company towards the bright future that we envision for our industry. Both of our companies hold compliance in high regard and believe that the industry needs to be more transparent. As international background checks become more common, we wanted to expand our capabilities to be a one-stop-shop for our clients that can provide both locally-nuanced checks, as well as international products. We are proud to add our Japan capabilities to HireRight’s international offering!

Thank you for your time, Tris! 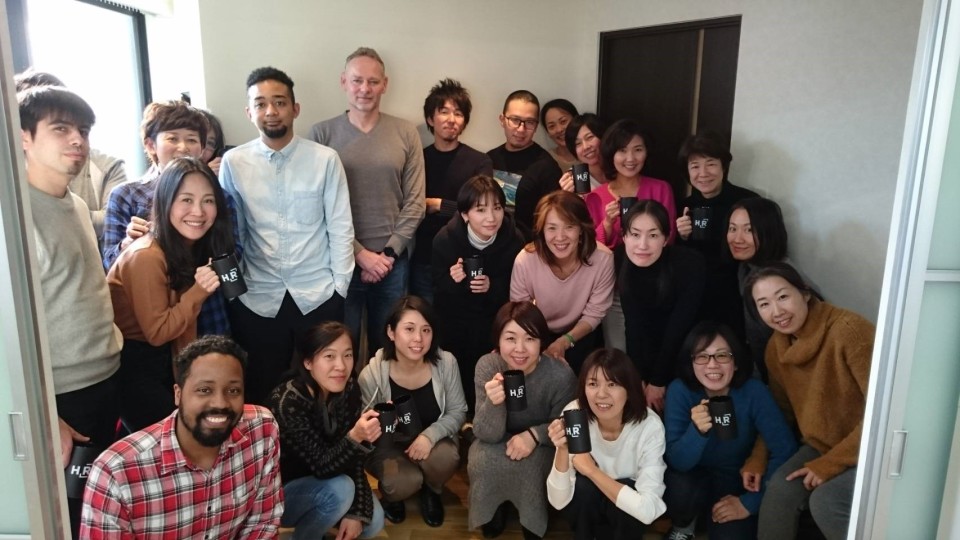 The industry has indeed come a long way. In the early days of the business, the focus was largely anchored on the need to educate. I remember spending most of my time with Tris going to client meetings dedicated to changing the misconstrued perception of background screening. Eventually, with hard work, we brought the industry out from the shadows and shone a light on the benefits of screening.

When compared to established markets, such as the US, Japan is still considered a very new market even after 20 years – the number of companies and industries that currently screen is limited and screening is still mainly conducted by a specific group of industries. However, we have made great progress since 2002, and I believe that the market size will only increase, with the additional international capabilities of HireRight.

While educating our clients on the benefits of a transparent screening process is still the key to increasing the uptake of background screening in Japan, the changing labour market conditions here will also benefit the industry. Moving away from the “job for life” model to many more mid-career moves, and the increase in foreign labour, will help highlight the potential risk of not conducting pre-employment screening.

So here is to many more exciting developments and a bright future for background screening in Japan.

To learn more about background screening in Japan, or to get answers for specific questions regarding your business needs, visit the contact us page.

Tris Fenwick is HireRight’s Country Manager for Japan, responsible for driving HireRight’s strategic growth in the market. He has over 20 years of experience in the background check industry, holding Managing Director roles for a range of consulting and pre-employment screening companies and oversaw markets such as Malaysia, Japan, Korea, and China. Most recently, Tris was Managing Director for J-Screen K.K, a company he founded that is specialised in providing background screening, company due diligence investigations, anti-money laundering (AML) programmes and know your client (KYC) screening to a broad range of overseas corporations. J-Screen K.K was acquired by HireRight in 2019. Tris received his bachelor’s degree in law from the University of London.

Akiko Wakaizumi is HireRight’s Senior Operations and Business Development Manager for Japan, responsible for driving growth and leading day-to-day operations for the pre-employment screening business in Japan. She has over a decade of experience in the background screening industry. She joined J-Screen K.K in 2016, which was later acquired by HireRight in 2019. Read her full bio here.

This article is part of the #BehindTheScreens series which explores the diverse nuances to consider for effective background screening in Asia Pacific. For more stories by the people powering the process, click here.

HireRight is a leading provider of on-demand employment background checks, drug and health screening, and electronic Form I-9 and E-Verify solutions that help employers automate, manage and control background screening and related programs.